Ramiro Sanchez is a respiratory therapist at Regional Medical Center. In his more than 18 years of working at the hospital, he’s seen a lot of change. But more interesting is what’s stayed the same.

It was 2004, and Sanchez was excited about his new job. At the age of just 18, he landed a gig in the radiology department at Regional. The job seemed to make sense. Familiar, almost. As a teenager born and raised in San Jose, the hospital towers standing over the east side of the city were a common site. It’s something only a local would know.

“I remember when the buildings came up, and when Regional became Regional,” Sanchez said. “I’ve seen it all.”

He began his health care career transporting patients. He was an orderly, taking them to the operating room, imaging, physical therapy. Wherever they needed to go, really. Curious, driven, and friendly, he excelled at his job. He liked it and people liked him.

From there, it was upward and onward. He got a new job working under nursing administration as a patient care technician, performing essential tasks like measuring and recording vital signs. He later transferred to the Emergency Department (ED) and the Intensive Care Unit (ICU), where he also worked as a technician.

Fast forward 15 years. It was 2019, and some things had changed. He married his high school sweetheart, they had kids, and they moved northeast to Tracy, CA. There, they had the space needed to raise their two children.

Sanchez also started taking classes at Carrington College. He planned to graduate in 2 years, and in 2021, he did just that. Three months later, he took and passed his Board exams. Later that year, he became a respiratory therapist at Regional, a highly specialized role that, among many things, helps people breath. 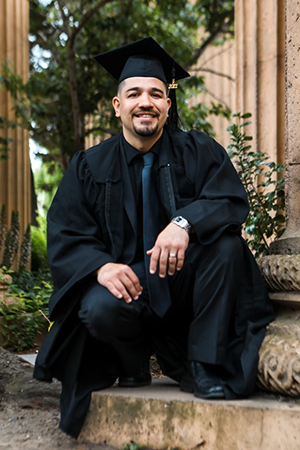 But there wasn’t much time for him to catch his breath, as COVID-19 was still wreaking havoc across the U.S., sending hundreds of thousands of patients to hospitals, many with breathing issues.

“It was a tough and emotional time,” he said. “This was before anyone for sure knew what was causing it and the best ways to help people recover from it. So, there was a lot of unknown, and that’s always scary.”

Sanchez looked to the expertise and experience of Regional’s advanced medical staff to help lead the way. They mentored and further trained him.

He also looked to his peers. While many of us were isolated at home, he looked to his team for group support. Sanchez and his colleagues checked in on each other, comforted each other, and laughed with each other during this time of crisis. Sharing their collective experiences was a form a therapy, and it helped them through the toughest of days.

“We looked out for each other, and we still do,” he said. “We had indoor soccer games together, would go out to eat together, and just be there for one another. We all share that Regional skin.”

Today, 18 years have gone by since that 18-year-old kid first took a job at Regional. Sanchez is now 37. While he has seen a lot of change, there are still some things that haven’t.

“I grew up at Regional, and I’ve spent half my life here,” he said. “This place has been here for me. It’s family, and I’m not going anywhere.”